Ghostly sound. I bought myself a theremin, a belated birthday present. A theremin is an electronically musical instrument controlled without physical contact by the player. The exact date of the theremin’s invention is unknown, historians place it somewhere between late 1919 and early 1920. It’s named after its inventor, Léon Theremin, who patented the device in 1928. The instrument has been used in movie soundtracks (such as Bernard Herrmann’s The Day the Earth Stood Still and recently Justin Hurwitz’s First Man), concert music, popular music, television and video games, (info Wikipedia). Feel free to check out some clips on YouTube. 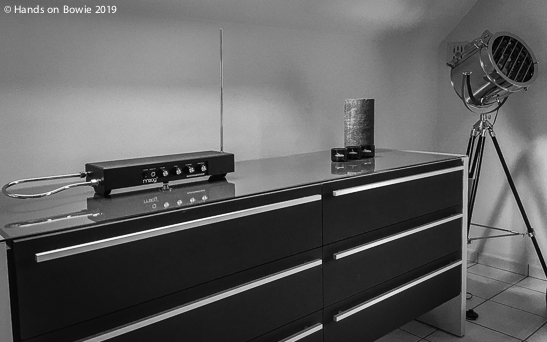 I used a friend’s theremin years ago for a few musical and sound design projects. I never became a professional player but I loved using the device. Now it will be mostly used as decoration. As you know from previous posts, my house got a complete makeover. I created an industrial style living room and the theremin will look very good on the dresser.

Mr. Bowie was also very interested in the device. Or maybe he was only waiting to get into the box? Rock on, Mr. Bowie! Right now I’m working on an experimental electronic piece, maybe I can throw in some theremin sounds?

Enjoy this beautiful day, my friends, wherever you are. Peace, love and understanding.